Home / Dealer Info / About Us

This picture is of Brooks Camper Sales when it was first founded. This was about 1967. There is a very interesting story as to why Blaine decided to sell campers. You see, Blaine loved the outdoors. He also loved to hunt. In Pennsylvania, it is normally cold in deer season.

Blaine decided to go deer hunting at his favorite spot. He and his friends took two flat bed trucks and were going to pitch their tents on the back of these trucks. Well, everything was fine until it started to get cold. They decided to heat their tents with on old time gasoline heater. When the heater was lit, the thing shot flame to the roof of the tent. Blaine knew that the tent was about to catch fire, so he threw the heater outside. Now the woods were on fire. Suffice it to say they fought the fire and saved the woods from sure disaster. 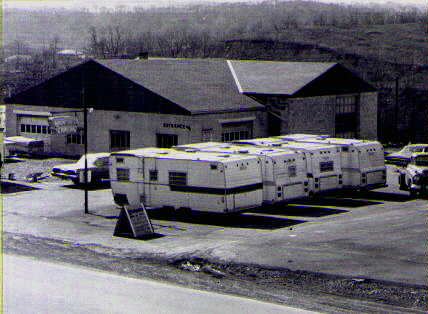 Tired, cold, dirty, and miserable they turned in for the night. The temperature dropped during the night. In the morning the water was frozen, soot was every where, and they were very cold. Blaine was not a happy camper. He promised himself the next year he would have a camper to stay in. The only trouble with that is there was no where to purchase a camper in the local area. Blaine saw the need for his hometown.

Thus, Blaine Brooks started Brooks Camper Sales and service. His product line was not big, but people liked the friendly, honest way he dealt with them. His business started to grow. This picture shows what the business looked like 3 years after it was founded.

The inventory has changed. You see how Brooks Camper Sales has grown. Maybe you should stop by and see why. When you do, you will walk in a customer but you will leave a friend.